Nuha Saad has been working in the area of public art for approximately 15 years and has successfully completed over 10 projects during this time, including large scale commissions for Councils, Transport for NSW and private developers. A selection of these projects are highlighted below. 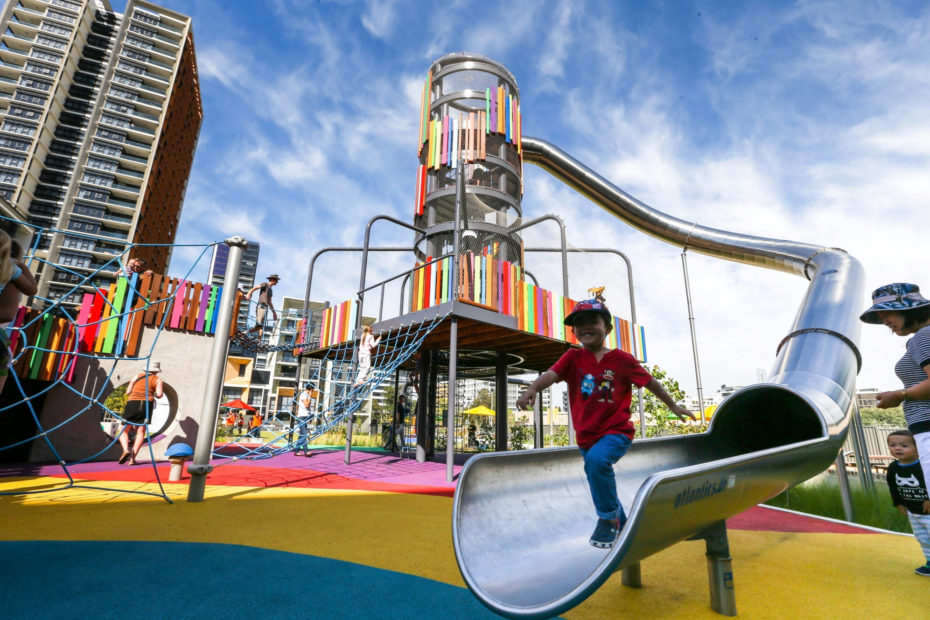 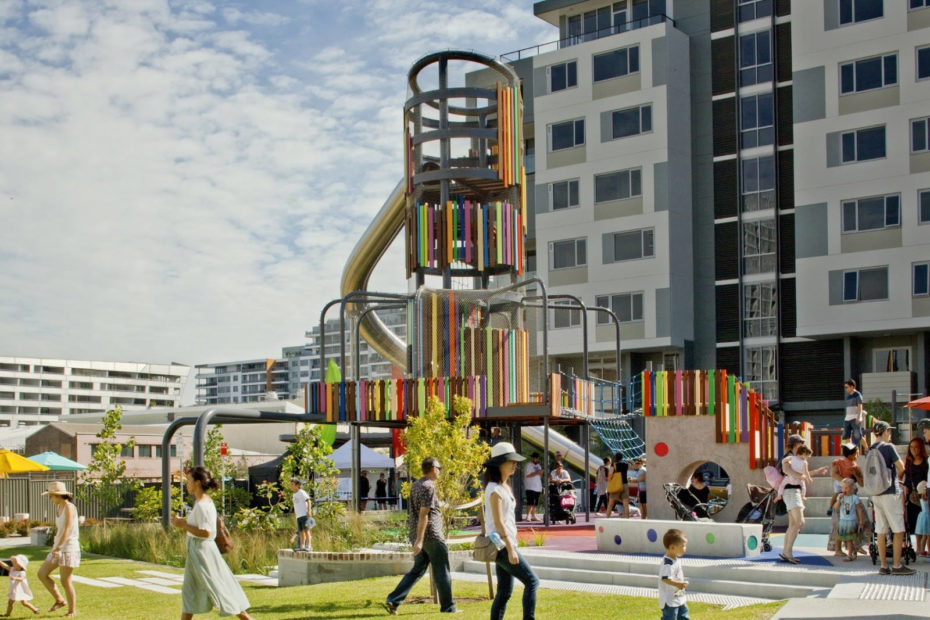 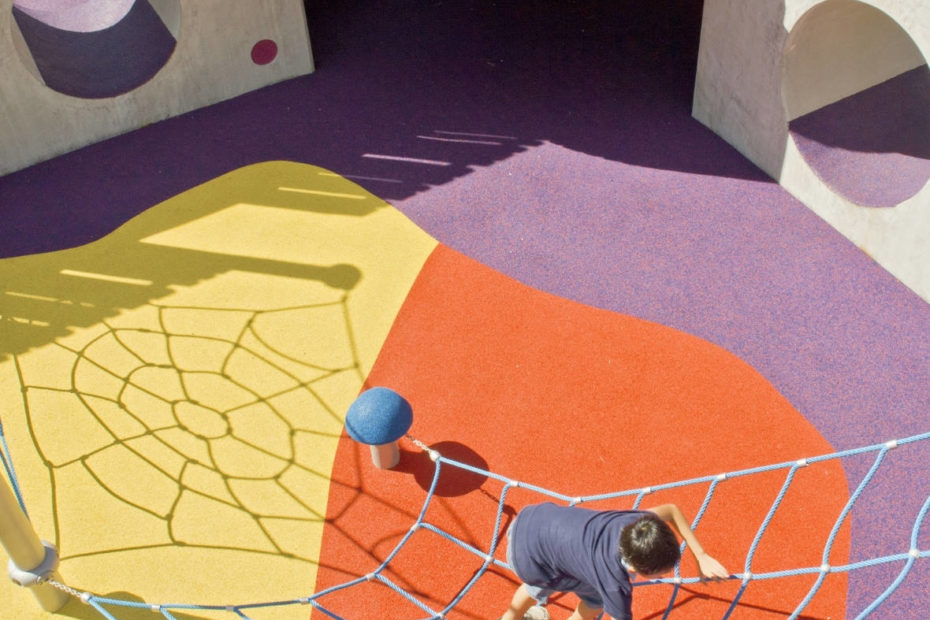 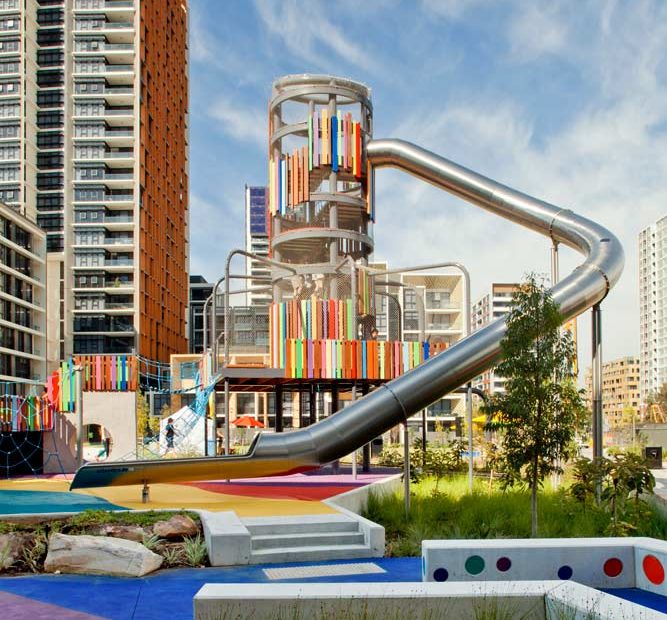 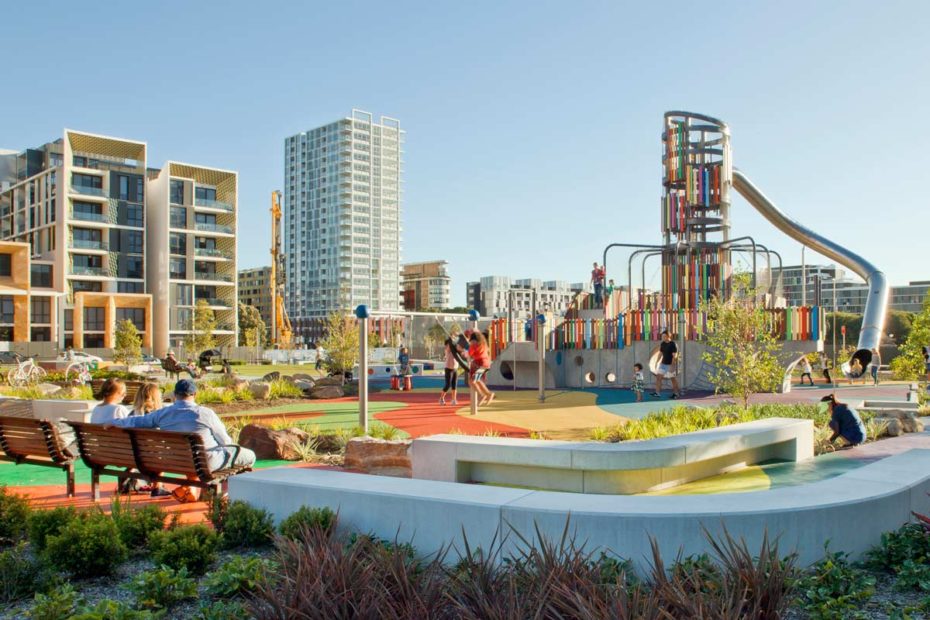 Wulaba Park is a public art commission at Green  Square for the City of Sydney and Meriton. This project was part of the large Green Square infrastructure development undertaken by the City of Sydney. Nuha worked closely with Sturt Noble Landscape Architects to create a series of artworks collectively titled Fun Field, that were integrated throughout the park design. The works built upon the themes of colour, play and discovery and what started as a private development for the residents in the surrounding apartment buildings has become a much-loved destination, making a visit to the park a magical and memorable experience for the whole community. Wulaba Park was nominated as one of the 10 best playgrounds in Australia (Guardian, April 2016) and won the Bruce Mackenzie Landscape Award CMAA Think Brick Awards (2017). 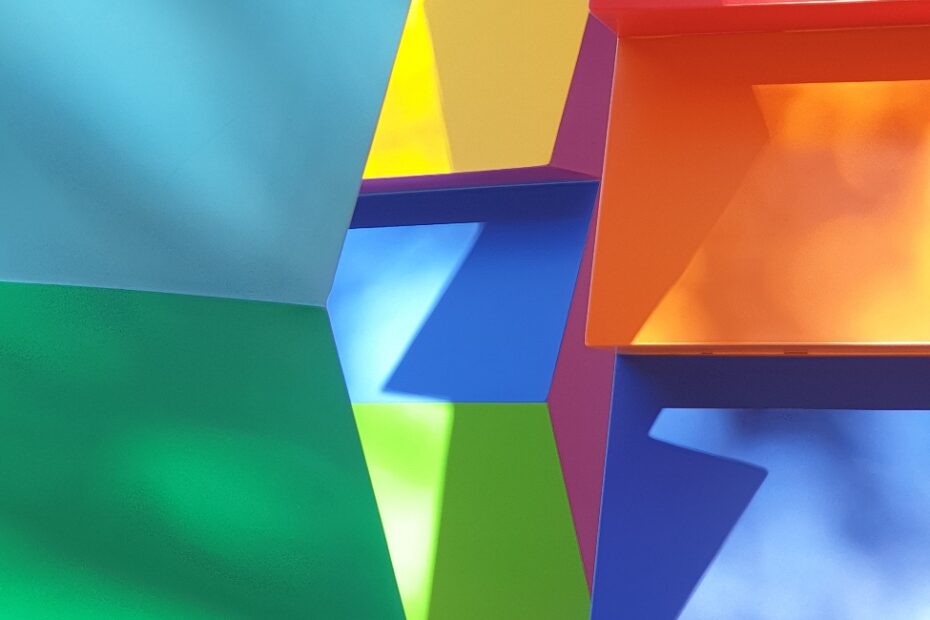 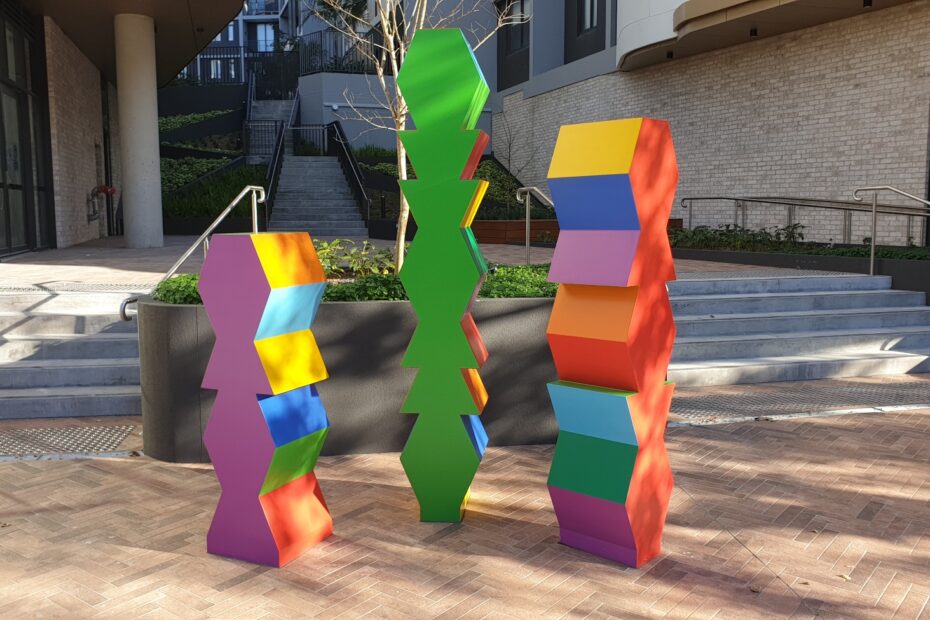 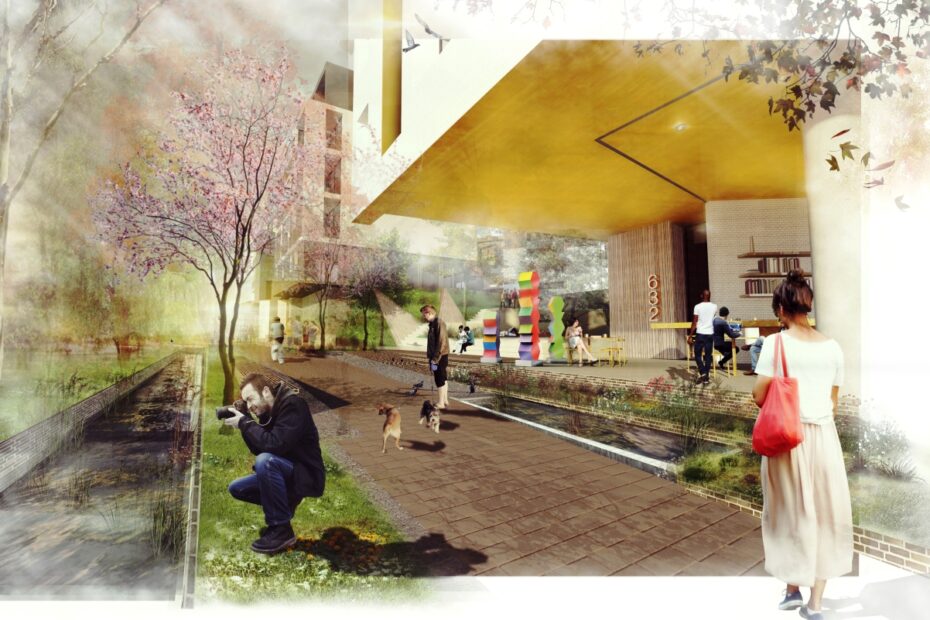 Nuha Saad was commissioned to develop a series of artworks for a residential development at Botany Rd, Alexandria. The resulting five sculptures titled Kaleidoscope, are presented as a response to the surrounding architecture of the chosen site with its multi-level stepped structures and forms.

Saad worked closely with Tilt Industrial Design who developed a methodology to design, fabricate and install the artworks. Careful material selections suitable for the public domain were also considered. The artworks include an arrangement of five sculptural column forms of varied irregular shapes and differing heights.  Additional to the sculptures were 30 hexagonal artworks applied in a pattern formation and integrated into the concrete benches at the site.

The artworks present as a collective and have been designed to integrate harmoniously into the site, whilst also adding a vitality and sense of colour to enhance the site and encourage place making. 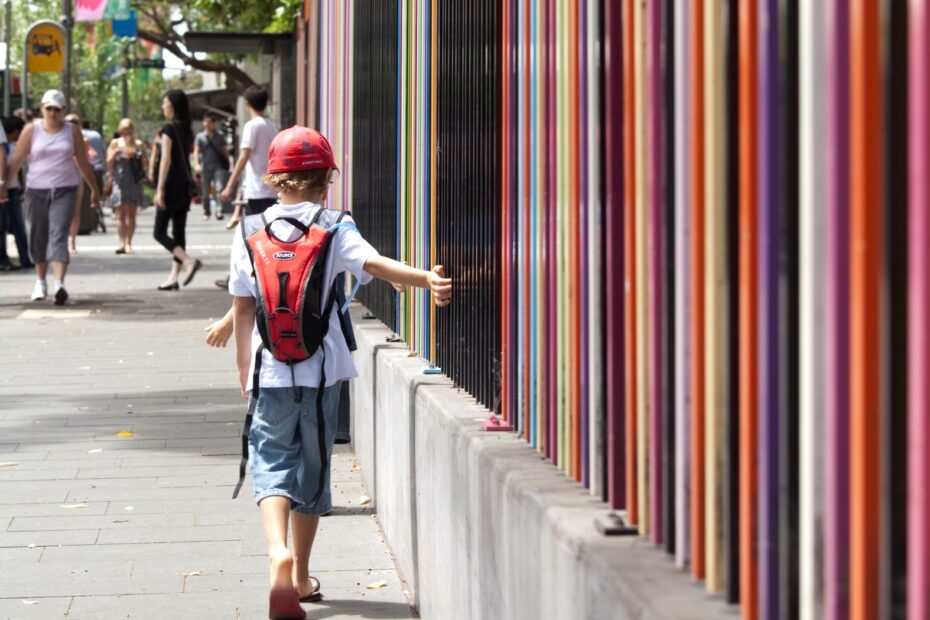 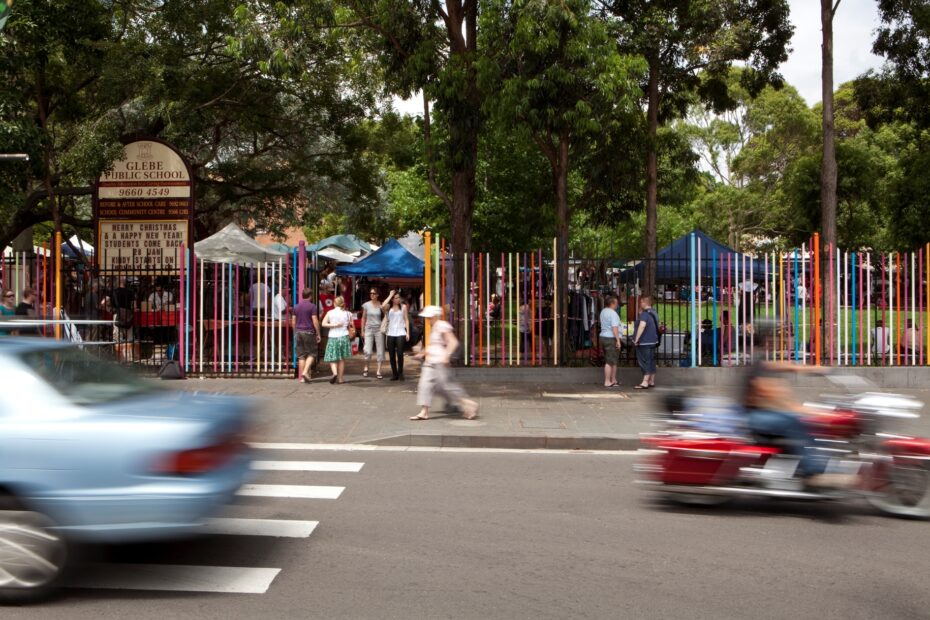 The Skippedy Skip Fence was commissioned by City of Sydney as part of major upgrade of Glebe Point Road. The fence is a 2.4 metre high, 80 metre long multi- coloured metal school fence. The accompanying coloured bus shelter is fabricated of coloured resin within a metal frame. These colourful artworks were designed to enhance and highlight Glebe’s vibrant contemporary culture. Glebe Public School turned 150 years old in 2008 (when the fence was launched), and the fence became a celebration of this fact, cementing positive relations between the school and the community.

City of Sydney Lord Mayor Clover Moore MP
The artwork, Skippedy Skip by public artist Nuha Saad, is a colourful and inspiring work of art and a centerpiece of the City’s upgrade of Glebe Point Road.“The colours of the fence symbolise the diversity of the residents of Glebe and add a vibrancy and vitality to the street,” Ms Moore said. “The artist has made the school fence as colourful and eclectic as Glebe itself, a true tribute to the area’s rich and diverse heritage. “Glebe has changed over 150 years, but Glebe Public School has always focused on what we all want from our education system – to give children the best chance to discover their talents and interests and realise their full promise in life,” Ms Moore said. Artist Nuha Saad said her artwork is based on wooden picket fences found throughout the Glebe area. “The school fence acts as a link to Glebe’s vibrant contemporary culture and its architectural and social history and combines aspects of Glebe’s Victorian architectural past with a contemporary art aesthetic,” Ms Saad said.

For The New City Beautiful project, Nuha Saad was commissioned to create three public artworks across a large development site at Rosebery in Sydney NSW between 2017 and 2019. The first a mural was installed in 2017, the second a sculpture in 2018 and the third a tiled wall work in 2019. The three artwork’s complement each other, as they are conceptually and aesthetically aligned. This project was a great opportunity to work on a large scale across architecture, colour and form to create artworks that activate their sites and inspire the community. 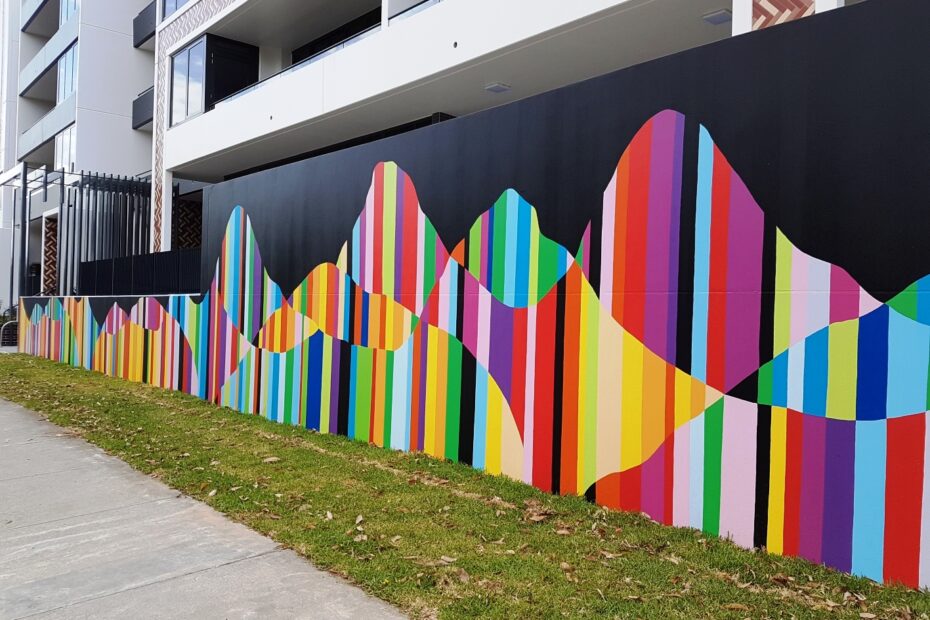 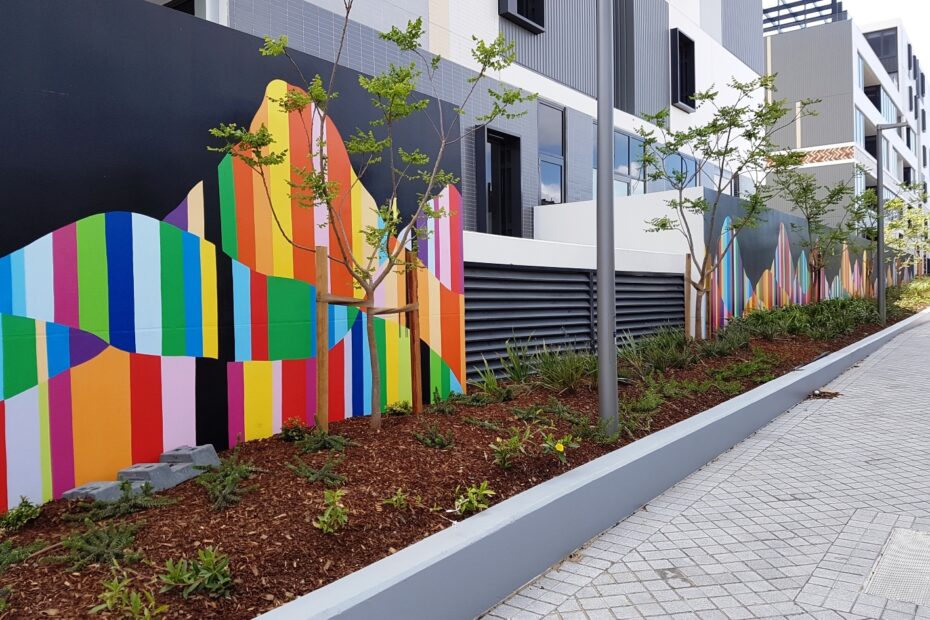 The New City Beautiful I 2017 (mural), is a 50 metre long multi-coloured painted design based on a repeating pattern and vibrant colour scheme. The colours are inspired by the colour wheel, where greens and blues transition into yellows and oranges through to reds and purples. The mural adds a vivid and kinetic character to the evolving streetscape of the Green Square area. (The mural was painted from Nuha Saad’s design by The Art of Wall). 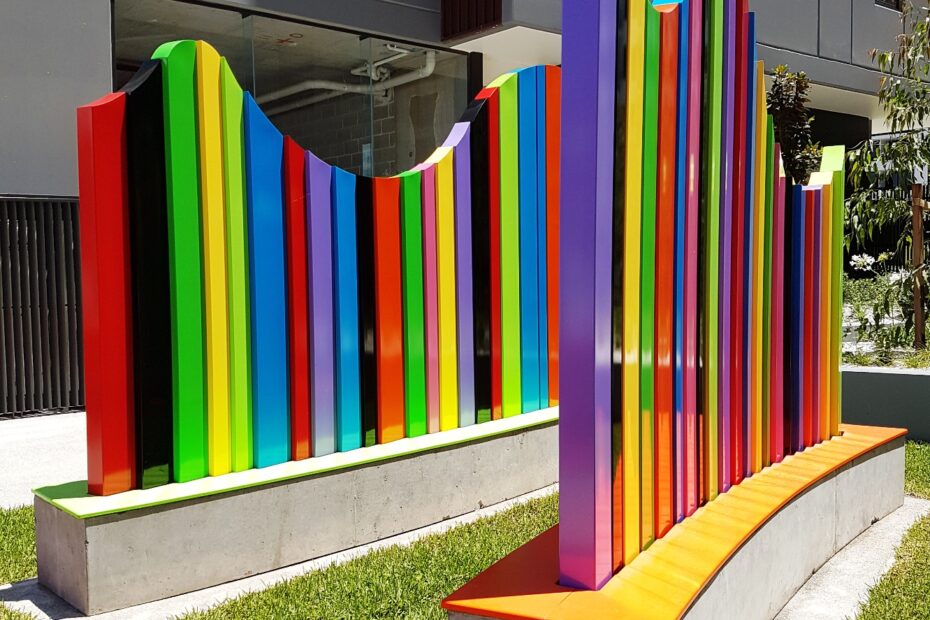 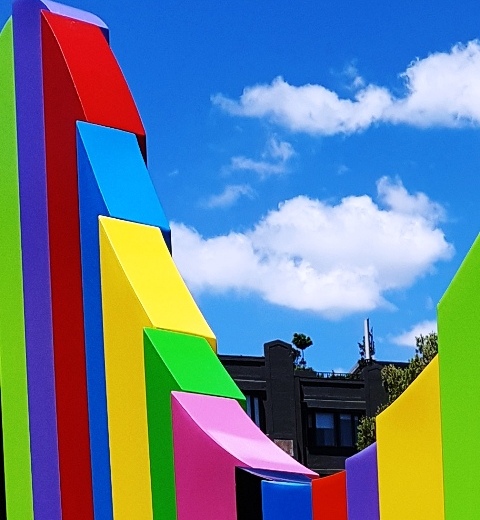 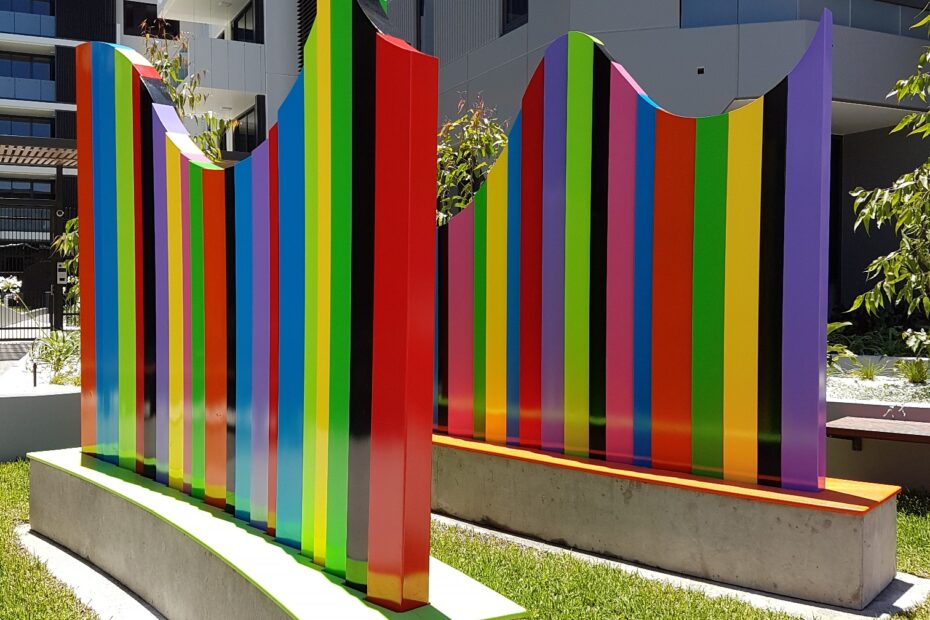 For the The New City Beautiful II 2018 (sculpture), Nuha Saad worked closely with TILT Industrial Design, who were commissioned to detail the design, construct and install the artwork. The sculpture is composed of two coloured curved steel elements painted in automotive paint and set in a concrete base. The sculpture pays homage to the historic features of long forgotten architectural structures of the local area including the many Victorian and federation era homes, warehouses and factories that drew the community here to live and work. 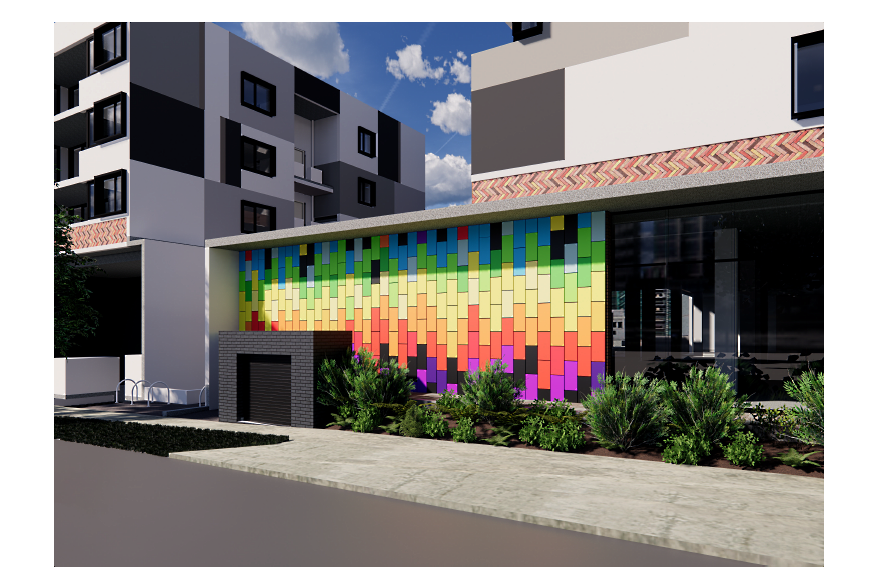 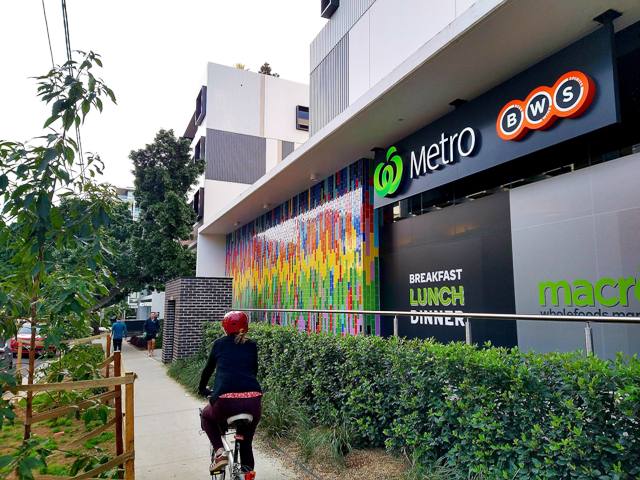 The New City Beautiful III 2019 is a tiled wall work measuring 5m (h) x 12m (l) and consists of approximately 3000 coloured tiles. The work represents an abstracted landscape and is intended to uplift the streetscape for the enjoyment of the community. 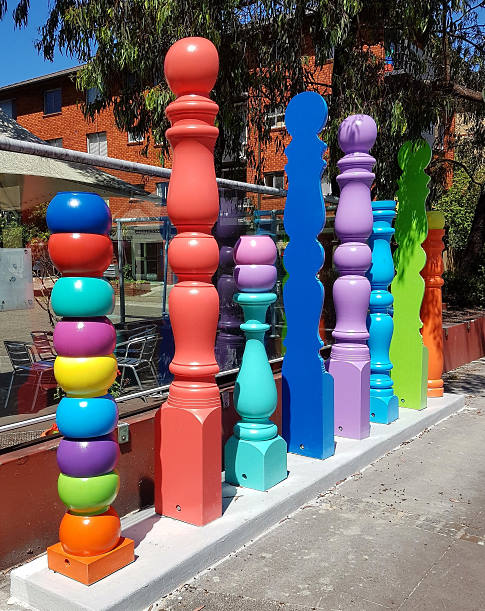 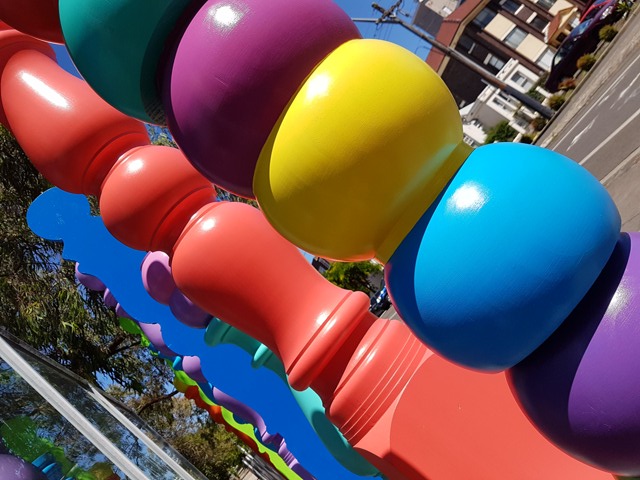 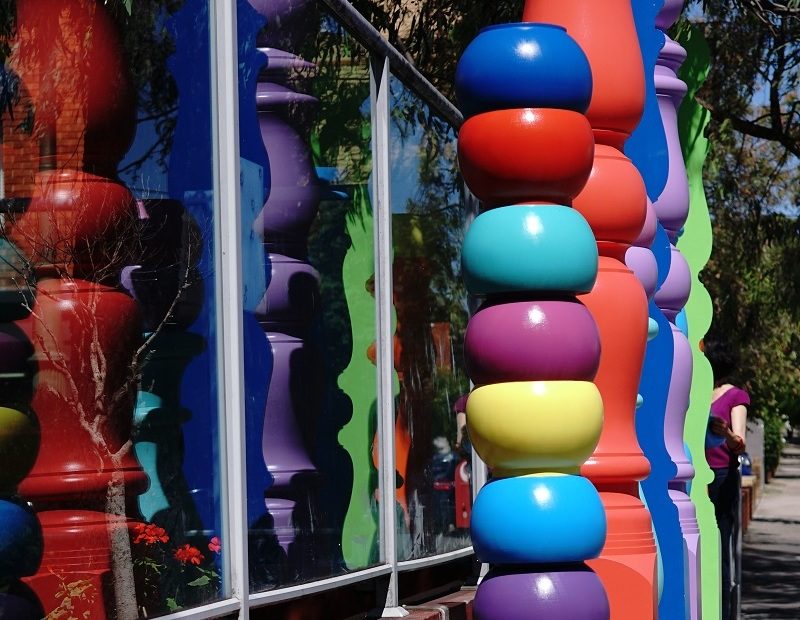 Nuha Saad’s work Velvet Nostalgia  was part of a new public art project ArtMoves 2017 that transformed the streets of Kensington and Kingsford in Sydney’s South East. The public art initiative saw a total of seven public artworks installed along Anzac Parade. Nuha’s work was installed on the corner of Addison Street and Anzac Parade Kensington and what was planned as a temporary 6-month public art work has now been acquired by Randwick Council and made permanent. The sculpture Velvet Nostalgia pays tribute to the suburb of Kensington’s rich architectural heritage and the many migrants who added life and colour to the area and created a sense of community and belonging. 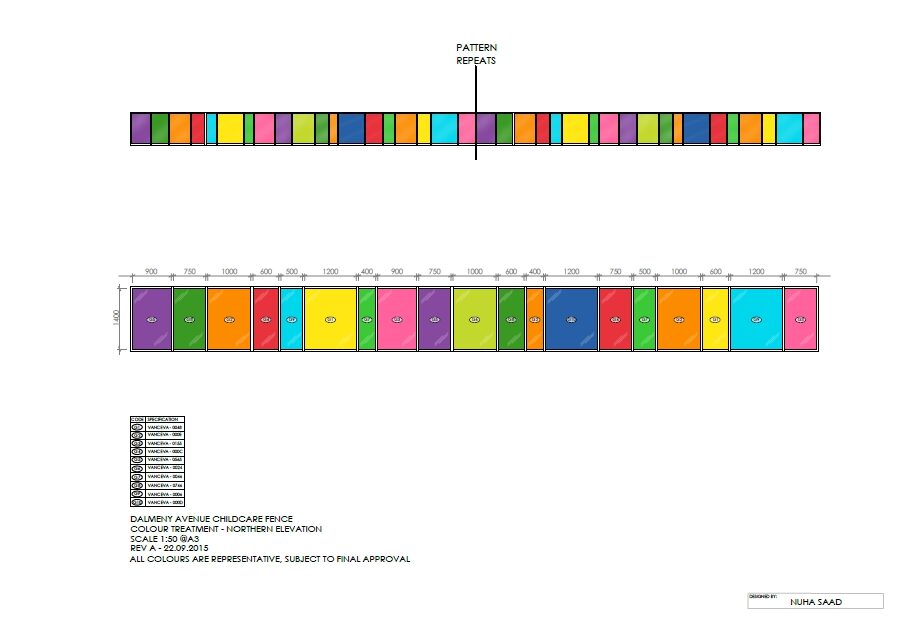 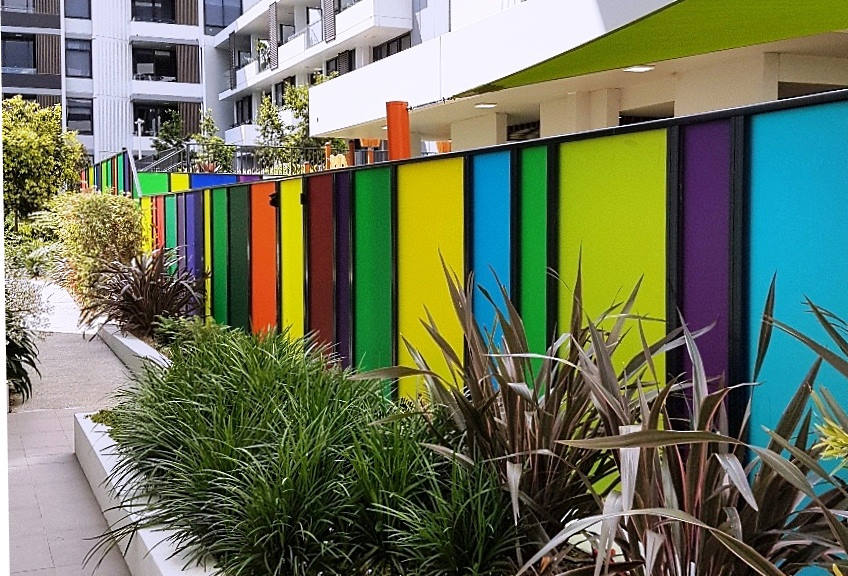 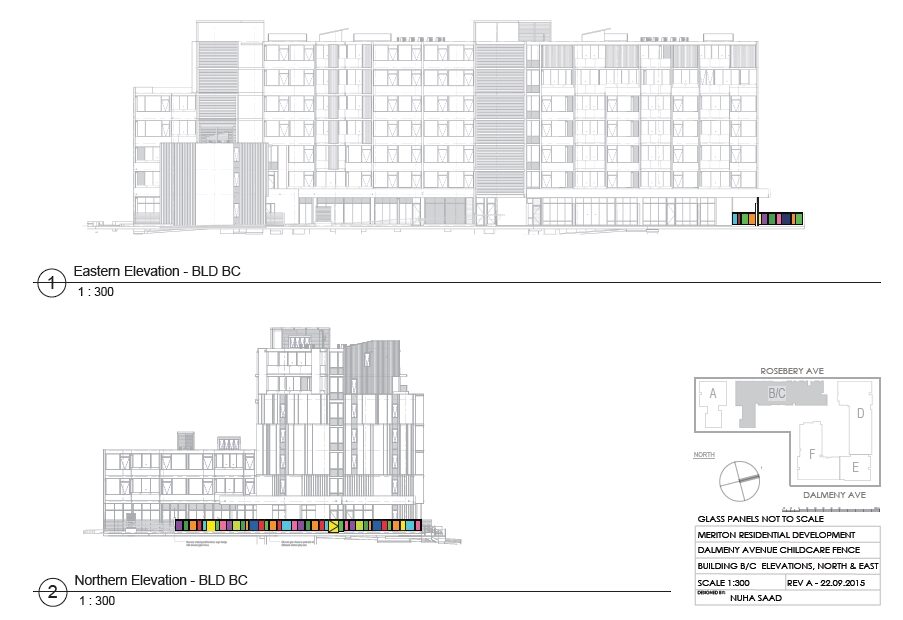 Made of Vanceva laminated glass, the artwork is a combination of primary, secondary and tertiary coloured glass panels. Designed for a child care centre, the fence is functional while also being a fun and playful addition to the Dalmeny Avenue streetscape. 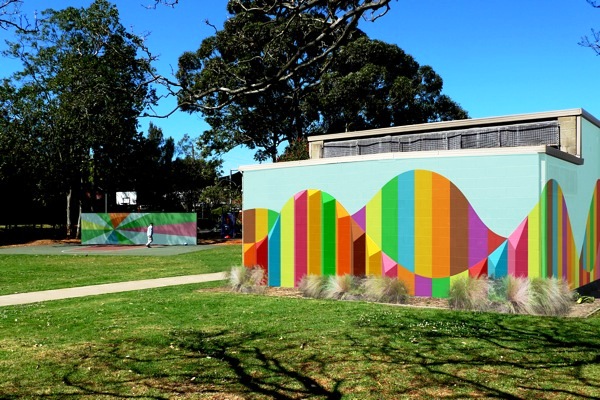 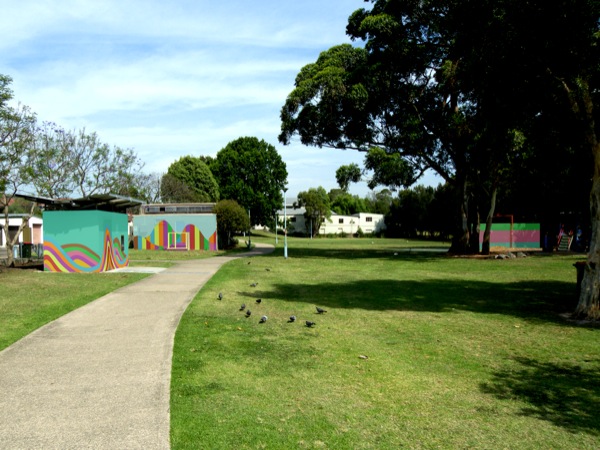 Rik Rak Ray is an extension of Nuha Saad and Ali Noble’s ongoing investigations into the bold application of colour in the private and public sphere. Both artists share a fascination with the multitude of possibilities that colour combinations present. In particular, the immediacy of emotional responses that colour evokes in the viewer. Saad and Noble believe in the positive and transformative power of colour on the psyche. Rik Rak Ray is an artwork designed to embody the ‘feeling’ of the local area and bring joy to the community.